Procopius, historian of the time of Justinian (518-565) wrote furiously against Theodora.

The portrait of Theodora is also much discussed. Here she is shown in her imperial robes, the purple which she claimed to prefer as her shroud rather than flee. On its hem the Magi are pictured bringing  their gifts to the Christ Child, while underneath it her white tunic has a deep border of gold, red and green. On her shoulders she carries a broad jewelled collar, and on her head a tall crown with long strings of pearls hanging from the edge over her breast. Unlike her ladies-in-waiting, who wear glorious garments in bright colours, decorated with motifs found on surviving fragments of silk, red shoes, necklaces, earrings and head coverings, Theodora has a monumental rather than human air. Some art historians think she presents her gift, a large bowl of coins, to the fountain in front of a dark space, which represents her death. Whatever the reason, this serious imperial figure captures the supreme authority of Empress Theodora, transformed from her origins as a pantomime artist. She stands facing her husband, who is displayed in full imperial costume, accompanied by Bishop Maximian, members of the clergy and his bodyguard. 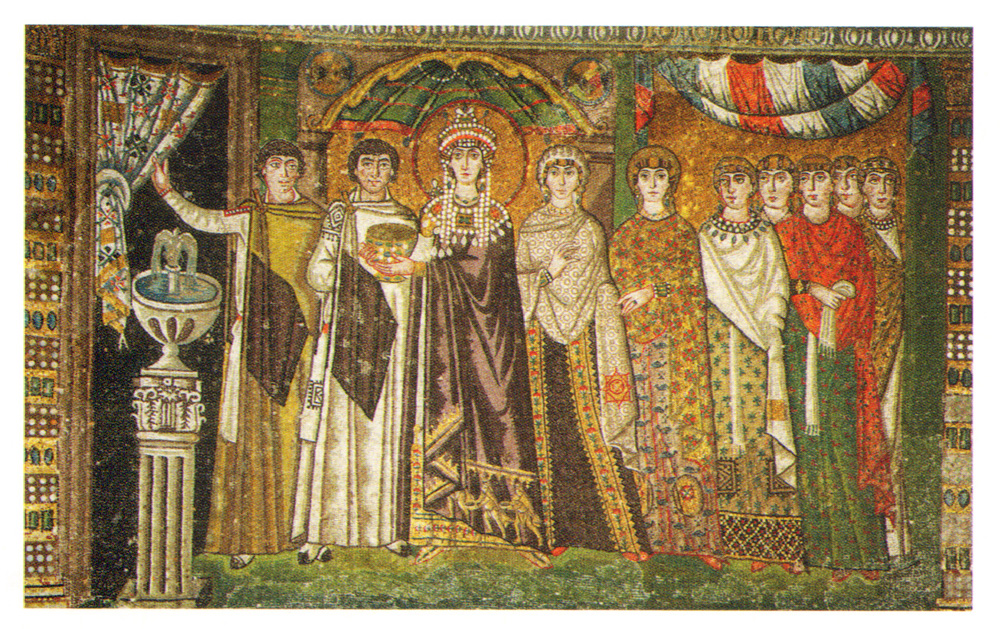